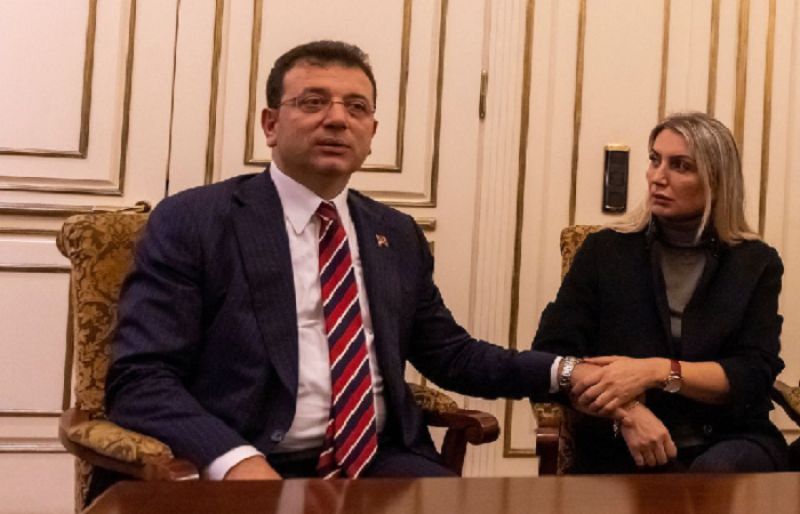 A Turkish court sentenced Istanbul Mayor Ekrem Imamoglu to jail on Wednesday and imposed a political ban on the opposition politician who is seen as a strong potential challenger to President Tayyip Erdogan in elections next year.

Imamoglu was sentenced to two years and seven months in prison along with the ban, both of which must be confirmed by an appeals court, for insulting public officials in a speech he made after he won Istanbul’s municipal election in 2019.

Riot police were stationed outside the courthouse on the Asian side of the city of 17 million people, although Imamoglu continued to work as usual and dismissed the court proceedings.

At his municipal headquarters across the Bosphorus on the European side of Istanbul, he told thousands of supporters that the verdict marked a “profound unlawfulness” that “proved that there is no justice in today’s Turkey”.

Voters would respond in presidential and parliamentary elections which are due by next June, he said.

The vote could mark the biggest political challenge yet for Erdogan, who is seeking to extend his rule into a third decade in the face of a collapsing currency and rampant inflation which have driven the cost of living for Turks ever higher.

A six-party opposition alliance has yet to agree their presidential candidate, and Imamoglu has been mooted as a possible leading challenger to run against Erdogan.

Kemal Kilicdaroglu, chairman of Imamoglu’s opposition Republican People’s Party (CHP), said he was cutting short a visit to Germany and returning to Turkiye in response to what he called a “grave violation of the law and justice”.

The US State Department is “deeply troubled and disappointed” by the sentence, Department principal deputy spokesperson Vedant Patel said. “This unjust sentence is inconsistent with respect for human rights, with respect to fundamental freedoms and rule of law,” he added.

“Justice in #Turkey is in a calamitous state, grossly used for political purposes. Very sad day,” he tweeted.

Imamoglu was tried over a speech after Istanbul elections when he said those who annulled the initial vote – in which he narrowly defeated a candidate from Erdogan’s AK Party – were “fools”. Imamoglu says that remark was a response to Interior Minister Suleyman Soylu for using the same language against him.

After the initial results were annulled, he won the re-run vote comfortably, ending the 25-year rule in Turkey’s largest city by the AKP and its predecessors.

The outcome of next year’s elections is seen hinging on the ability of the CHP and others in opposition to join forces around a single candidate to challenge Erdogan and the AKP, which has governed Turkey since 2002.

Erdogan, who also served as Istanbul mayor before rising to dominate Turkish national politics, was briefly jailed in 1999 for reciting a poem that a court ruled was an incitement to religious hatred.

Selahattin Demirtas, the jailed former leader of the pro-Kurdish Peoples’ Democratic Party (HDP), tweeted that Imamoglu should be incarcerated in the same prison where Erdogan was held so that he could ultimately follow his path to the presidency.

A jail sentence or political ban on Imamoglu would need to be upheld in appeals courts, potentially extending an outcome to the case beyond the elections date.

Critics say Turkish courts bend to Erdogan’s will. The government says the judiciary is independent.

“The ruling will be final only after the higher court decides whether to uphold the ruling or not. Under these circumstances, it would be wrong to say that the political ban is in place,” Timucin Koprulu, professor of criminal law at Atilim University in Ankara, told Reuters after the ruling.