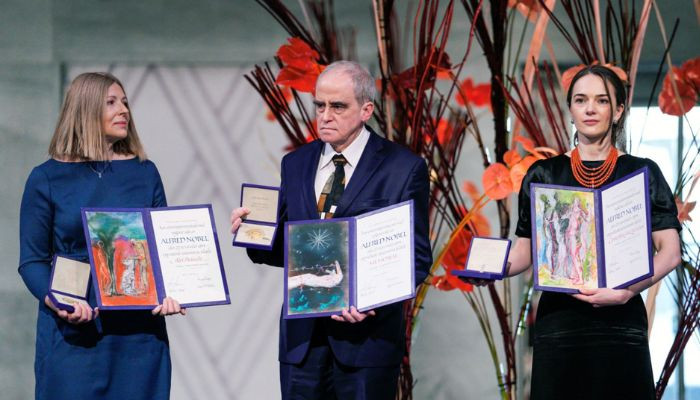 OSLO: A trio from the three nations at the centre of the war in Ukraine accepted their Nobel Peace Prize on Saturday, calling for an unabated fight against Russian leader Vladimir Putin’s “insane and criminal” invasion.

Jailed Belarusian rights advocate Ales Bialiatski, Russian organisation Memorial and Ukraine’s Center for Civil Liberties (CCL) were honoured by the Nobel committee for their struggle for “human rights, democracy and peaceful co-existence” in the face of authoritarianism.

“The people of Ukraine want peace more than anyone else in the world,” the head of the CCL, Oleksandra Matviichuk, said. “But peace cannot be reached by a country under attack laying down its arms.”

Founded in 2007, the CCL has documented war crimes allegedly committed by Russian troops in Ukraine.

These include shelling residential buildings, churches, schools and hospitals, bombing evacuation corridors, the forced displacement of people, and torture.

Due to the Russian bombing of Ukraine’s energy infrastructure, Matviichuk had to write her Nobel acceptance speech by candlelight, she told AFP.

In the nine months since the start of the Russian invasion, the CCL has documented more than 27,000 cases of alleged war crimes, which she said were “only the tip of the iceberg”.

“War turns people into numbers. We have to reclaim the names of all victims of war crimes,” she said in her speech, her voice overcome with emotion.

In Oslo’s City Hall decorated with red Siberian flowers, Matviichuk reiterated her appeal for an international tribunal to judge Putin, his ally Belarusian President Alexander Lukashenko and “other war criminals”.

Putin and his “ideological servants” have hijacked the anti-fascist struggle “for their own political interests”, he said.

Now, “resistance to Russia is called ‘fascism'”, and has become “the ideological justification for the insane and criminal war of aggression against Ukraine”, he said, using harsh language considering the stiff penalties Moscow imposes on those who publicly criticise the invasion.

Founded in 1989, Memorial has for decades shed light on crimes committed by Joseph Stalin’s totalitarian regime, worked to preserve the memory of the victims, and documented human rights violations in Russia.

Amid crackdowns on the opposition and media, Russia’s Supreme Court ordered Memorial dissolved at the end of 2021.

It then ordered a raid of its Moscow offices on October 7 — the very day it was announced as co-winner of this year’s Peace Prize.

“Today, the number of political prisoners in Russia is more than the total number in all of the Soviet Union at the beginning of the period of perestroika in the 1980s,” Rachinsky said, referring to a Soviet era term for the policy of restructuring or reforming the economic and political system.

The third Nobel laureate, Ales Bialiatski, founder of rights group Viasna, has been detained in Belarus since July 2021 pending trial following Minsk’s crackdown on large-scale protests against the regime.

The 60-year-old was not authorised to transmit an acceptance speech for the Nobel ceremony.

Instead, his wife Natalia Pinchuk, who accepted the award on his behalf, shared some of his thoughts, recorded earlier, including a call to fight against “the international of dictatorships”.

In Ukraine, Russia is trying to establish “a dependent dictatorship”, he said, quoted by his wife.

“The same as today’s Belarus, where the voice of the oppressed people is ignored and disregarded”, he said, citing “Russian military bases, huge economic dependence, (and) cultural and linguistic russification”.

“Goodness and truth must be able to protect themselves,” he said.

Later Saturday, a separate awards ceremony in Stockholm honoured the winners of the other Nobel prizes in the fields of medicine, physics, chemistry, literature and economics.

Among the laureates was Annie Ernaux of France, who won the literature prize, former US central bank chief Ben Bernanke who won the economics prize, and Barry Sharpless of the US, who won the chemistry prize for the second time.

Also in attendance were the laureates from 2020 and 2021, when the Stockholm festivities were cancelled due to the COVID-19 pandemic.

A lavish banquet was held later in the evening at Stockholm City Hall for some 1,500 guests, including the Norwegian royal family.