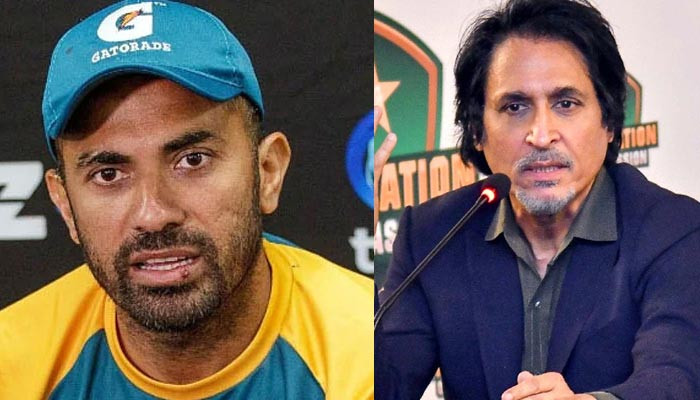 Pakistan’s experienced pacer Wahab Riaz opened up on rampant favouritism when Mohammad Wasim was a chief selector of the national men’s team during the tenure of former Pakistan Cricket Board (PCB) Chairman Ramiz Raja.

Taking a dig at the former chief selector for sidelining senior cricketers despite their performances, Wahab — who last played an international match in 2020 — said: “Laptop chief selector [Wasim] did the poor selection. He didn’t have justification for not selecting players like Imad Wasim, Shoaib Malik, and Sarfaraz Ahmed.”

“Shoaib and Imad performed well in T20 World Cup 2021. Why didn’t their performance come on his laptop? Why were they ignored for the T20 World Cup 2022 in Australia? What was their fault?” the 37-year-old cricketer asked during an exclusive interview with Geosuper.tv.

When Wahab was asked whether he had ever discussed the issue with the former PCB chairman, he said he hadn’t.

“I know Ramiz bhai was the ultimate authority. The chief selector should have communicated with us, but in our culture, you communicate with only people who agree with you. You don’t communicate with those who know how to defend their stance,” he added.

Wahab was dropped from the squad after he picked five wickets in two ODIs and four wickets in three T20Is he played in 2020 when Ehsan Mani was the PCB chairman and Wasim Khan was the CEO.

Wahab reiterated that there must be a limit to favouritism.

“There must be a limit to favouritism. It’s not right to sideline players calling them over-aged. If age is important, then the rule must be the same for everyone,” the veteran pacer highlighted.

“Take the example of Misbah Bhai, who performed for Pakistan at 40+ age. I think the peak of any cricketer starts after the age of 30. There are a lot of other examples too. Rohit Sharma, Virat Kohli, and Faf Du Plessis, all are 30+, but performing for their teams. In my opinion, age must not be the criterion. If any senior player is worthy of playing for the team, he should be selected regardless of age,” he maintained.

Following his recent form in Bangladesh Premier League (BPL) 2023, Wahab eyes a comeback on the national side.

“There have been a lot of highs and lows in my career but I always try to believe in my hard work and skills,” said Wahab who completed recently joined the 400-club by taking 400 T20 wickets during this year’s BPL.

Wahab became the second pacer in T20 history to take 400 wickets. The first pacer was Dwayne Bravo of the West Indies.

“My job is to perform and make my case stronger. Obviously, it’s the World Cup year and I really want to represent Pakistan once again,” added Wahab who had already stated that he will decide his future after this year’s mega 50-over format event.

Wahab revealed that he was allowed to train at the National Cricket Academy (NCA) in Lahore without any hindrance.

“I won’t lie here, Nadeem Khan [ex-Director High-Performance Centre] allowed me to train in NCA every time. Yes, Amir and some other players, who didn’t play for Pakistan during the last two years, weren’t allowed. But, I always trained there and utilised all their facilities,” he shared.

Wahab sees Najam Sethi‘s arrival as positive for the betterment of cricket in the country.

“Najam Sethi’s arrival is good for cricket. I hope he does justice with players like me, Sarfaraz, Hafeez, Malik, and Hassan Ali who have performed well for Pakistan,” he concluded.